Navidad Isleña is a program of cultural activities developed in Lanzarote and focused on music and popular culture.

Activities that will tour the streets and squares of the seven municipalities of the island during their almost 6 weeks with parties, choirs, Pascua ranches and folk groups.

In total there will be 22 concerts in which a total of 41 groups will participate, of which 16 are folk groups, 12 parrandas, 7 choirs, 5 Easter ranches and 2 musical groups. 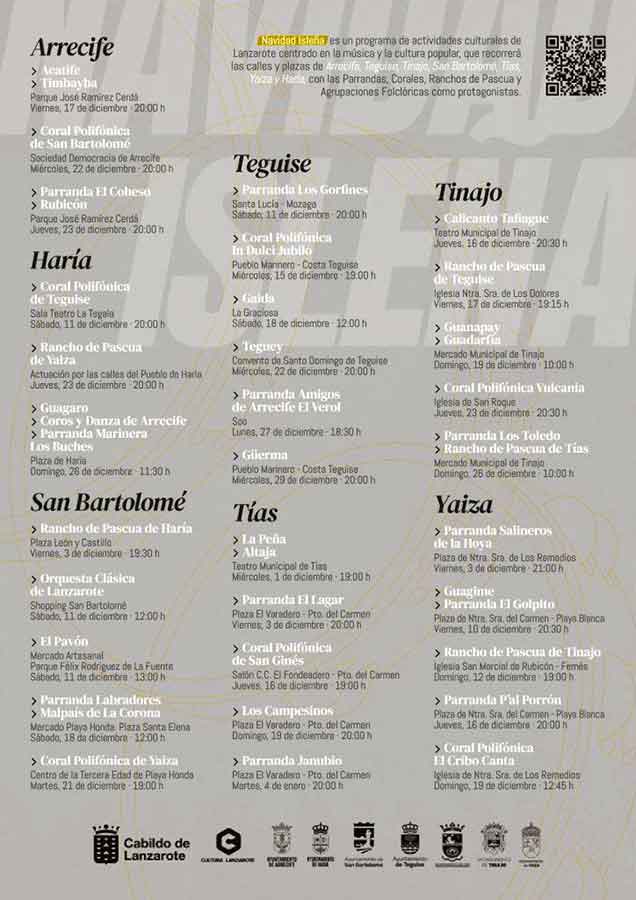 The program in Teguise begins on Saturday December 11 with the concert of the Parranda Los Gorfines in Santa Lucía, Mozaga.

The In Dulci Jubilo Polyphonic Choir will perform on Wednesday, December 15 at the Pueblo Marinero de Costa Teguise.

A.F. Gaida will be the one to perform in La Graciosa and will do so on Saturday, December 18.

For its part, Teguey will perform at the Santo Domingo Convent on Wednesday, December 22.

The Parranda Amigos de Arrecife El Verol, will do it in Soo on Monday, December 27.

And finally, Güerma will perform on Wednesday, December 29, again at the Pueblo Marinero de Costa Teguise.