It embraces the whole island and tempers its climate. It’s both party and pantry. The sea is omnipresent: it’s on your skin and on your plate; in your clothes and in your eyes.

Today, in the middle of summer, is a great time to get to know the island’s most maritime cultural manifestations. 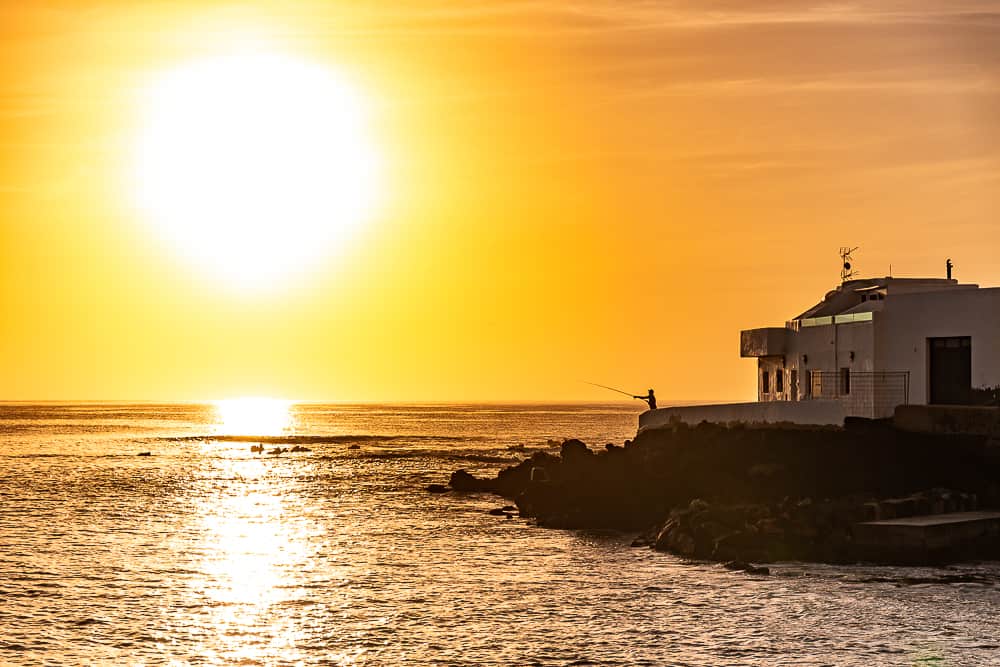 On the eve of Midsummer, islanders prepare a basin of water, herbs and wild ﬂowers. When they wake up, they wash their faces with a potion of lavender, hollyhock, fig leaves, rue or rosemary and feel as good as new.

In the old days, families in inland villages used to treat themselves to their first swim of the year on the beach on June 23rd. That’s now a thing of the past, and dips in the sea are a delight from January to December.

In mid-July, Playa Blanca, Teguise, La Graciosa, Puerto del Carmen and the capital’s Valterra neighbourhood celebrate their festivities in honour of the Virgen del Carmen, the patron saint of sailors. Dinghies and boats are decorated with colourful bunting and the statue of the Virgen del Mar sets sail flanked by sailors. The boats’ horns, the cheers of the crews and the traditional Salve Marinera sound in a maritime procession along the coast. 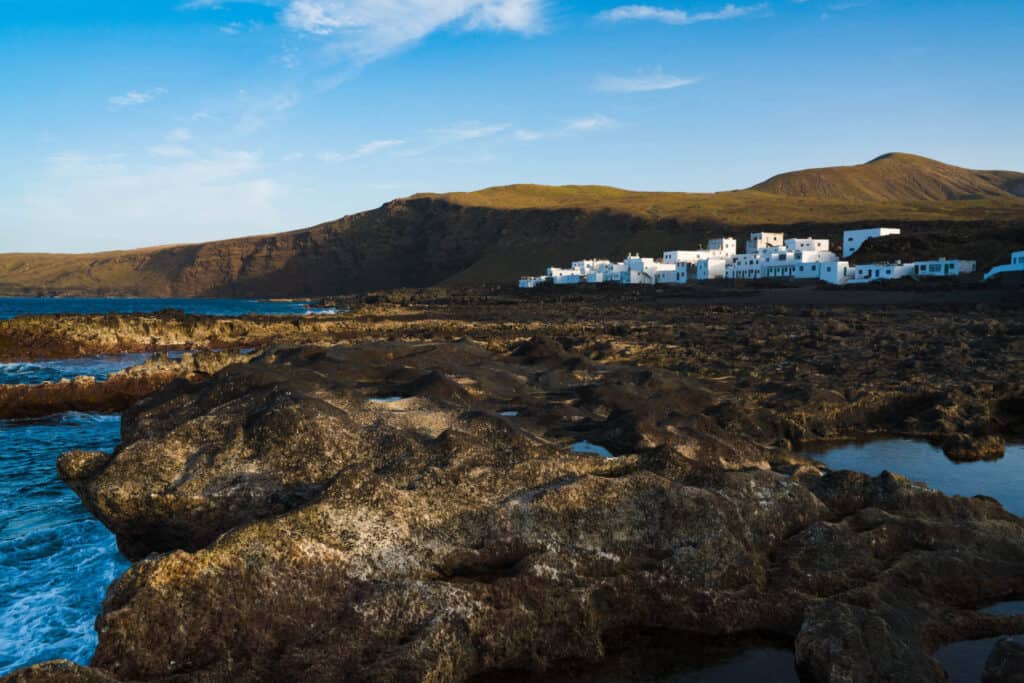 In Caleta Caballo the limpet is elevated to religious status. The locals make an image of one of these delicious gastropods and take it for a stroll through the streets of the village. Tenésara, on the coast of the Timanfaya National Park, is repopulated with holidaymakers who share family barbecues based on fresh fish and sea urchins.

A Pulitzer inspired by Gregorio Fuentes 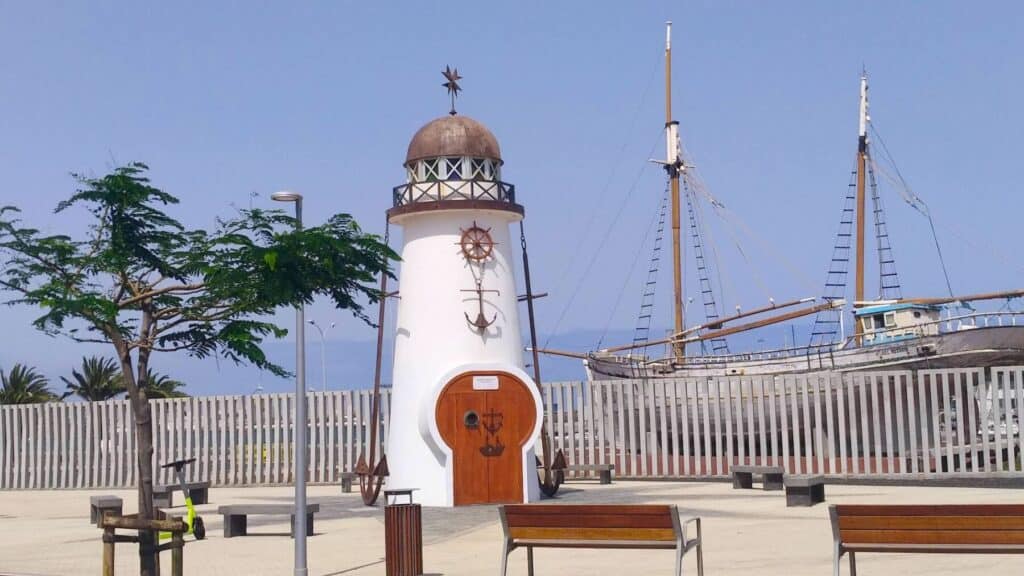 Did you know that the protagonist of Ernest Hemingway’s Pulitzer Prize-winning The Old Man and the Sea was inspired by a sailor from Lanzarote? His name was Gregorio Fuentes and he was born in Arrecife in 1897. He embarked on a steamer as a stowaway, bound for Cuba, in search of a better life. You can hear all about it as you paddle around the Arrecife marina in a kayak, seeing the city from where it is best understood: the sea.

A small sculpture in the shape of a lighthouse is always dressed in fresh flowers in Puerto Naos: it is a tribute to those who died in the Cruz del Mar and is in memory to the seven sailors who were killed in 1978 while fishing in the waters of the Canary-Saharan bank. 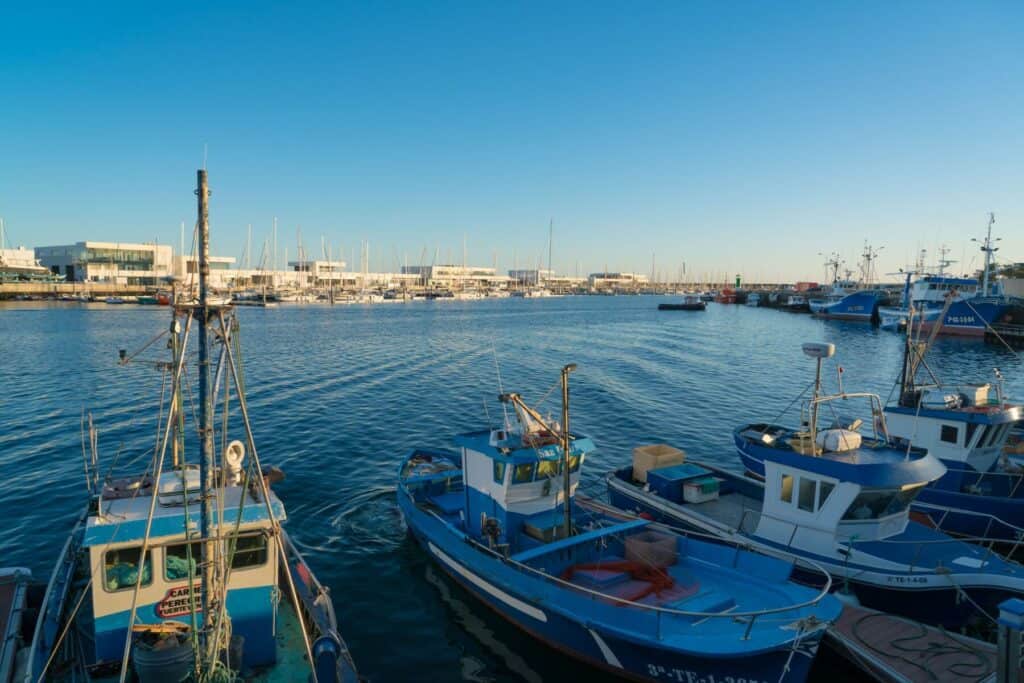 The inshore fleet leaves from Puerto Naos to fish for Atlantic wreckfish, Mediterranean parrot fish and tuna that can then be bought in the island’s fishmongers and fishermen’s guilds, or sampled in gourmet canned form. In the same bay is the Instituto Politécnico de F.P. Marítimo-Pesquero de Canarias (popularly known as the “Escuela de Pesca” or “Fishing School“), a centre with more than 75 years of history and a benchmark for anyone wanting to study nautical and fishing higher education in the south of the European Union.

Master Agustín Jordán also has his workshop in the island‘s capital, where he continues to teach the craft of ship’s carpentry to nautical enthusiasts from Japan, Italy, Cadiz, Cartagena and Girona. His creations are made from wood, from the first to the last frame, with precision and an incalculable love of sailing.

Jolatero races and a historic regatta

There’s no Festa de San Ginés without a race involving jolateros, improvised boats built with fuel cans that were used to get from shore to boat. This ingenious reuse of tin that began in 1940 has become a summer entertainment for the kids of the Charco, who build them, paint them and throw them into the water to see who the fastest paddler is using the chapaletas. You’ll find small jolateros as planters or mementos in many shops in Arrecife. 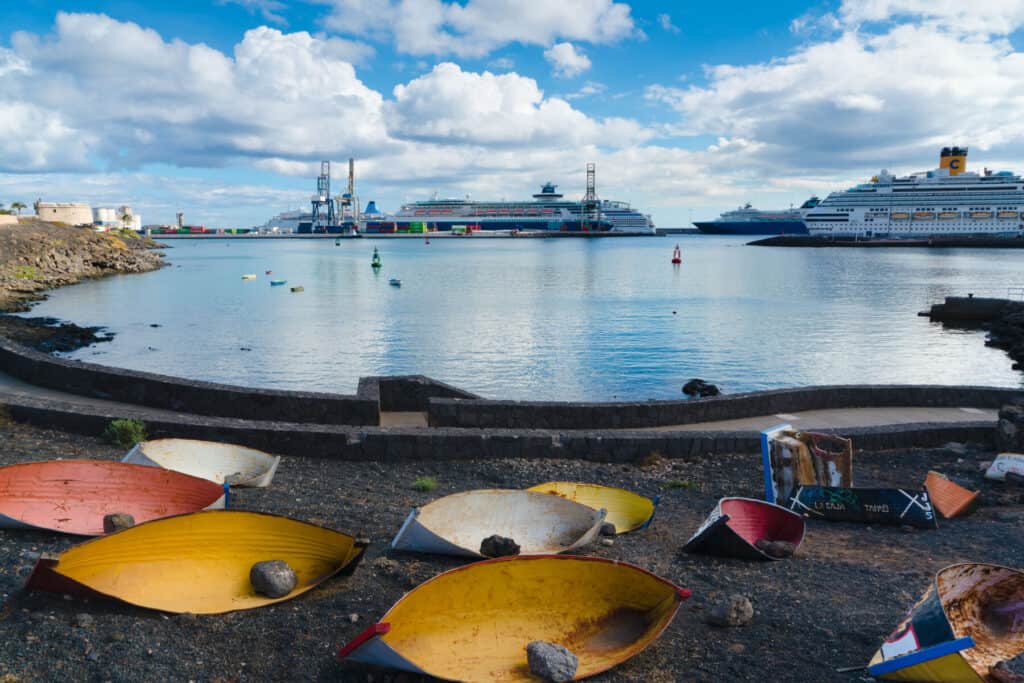 You have to get to the Charco de San Ginés early if you want to attend the traditional Encuentro de Habaneras y Músicas del Mar  held every August, to listen to sounds from both sides of the Atlantic, twinned by emigration. Centuries ago, these same Atlantic waters were also crossed by traders, pirates and corsairs, both European and African, who left marks of terror and cultural influences on the island’s language and its people. 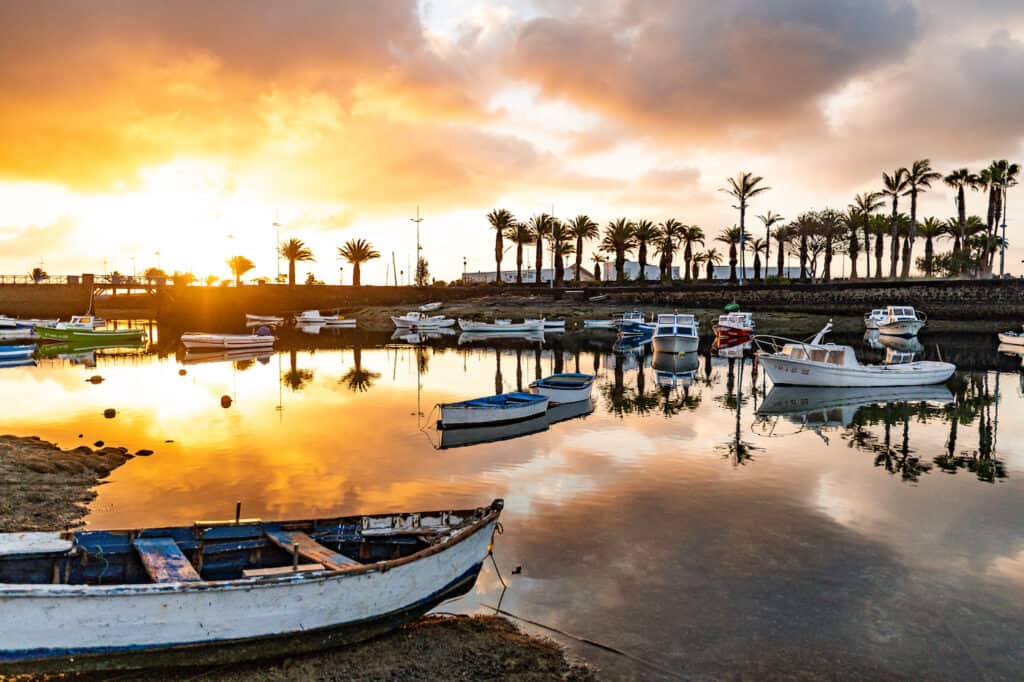 In summer, Spain’s oldest cruising regatta is held: the Regatta de San Ginés, a regatta that has to deal with the strong trade winds and whose origins go back to the traditional coastal boat races of sailing boats that used to fish in Africa.

We’re told all about it as we stroll through Marina Rubicón and Marina Lanzarote, among mooring posts, sailboats and spectacular glass fibre boats. The Spanish Olympic sailing team and the best of the continent’s crews also trained in the island’s waters at the beginning of the year. 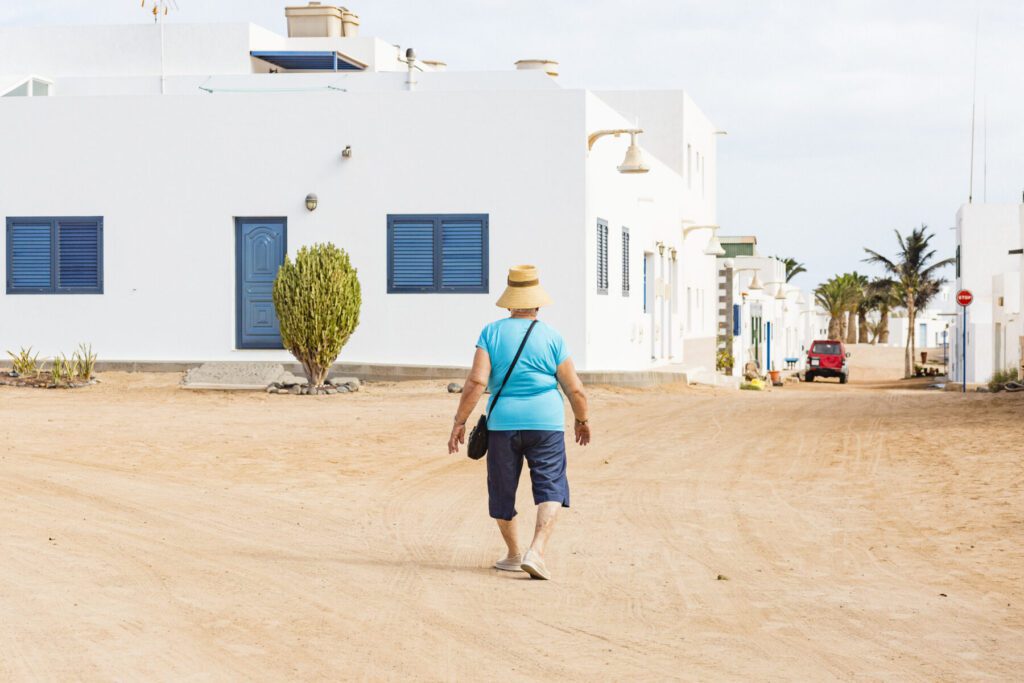 To make a typical La Graciosa hat properly, the air must be charged with marine humidity. The same maresía (sea spray) that curls your hair and envelops the coast in a delicious ‘sea grass‘ scent is what bends the vegetable fibre and allows the meticulous braiding of the empleita in Caleta del Sebo, the cradle of this craft. By the way, you must visit the village church to check out its decoration: pots, an anchor, a boat carved in wood, fish-candelabra and a ship’s rudder that serves as a pulpit. 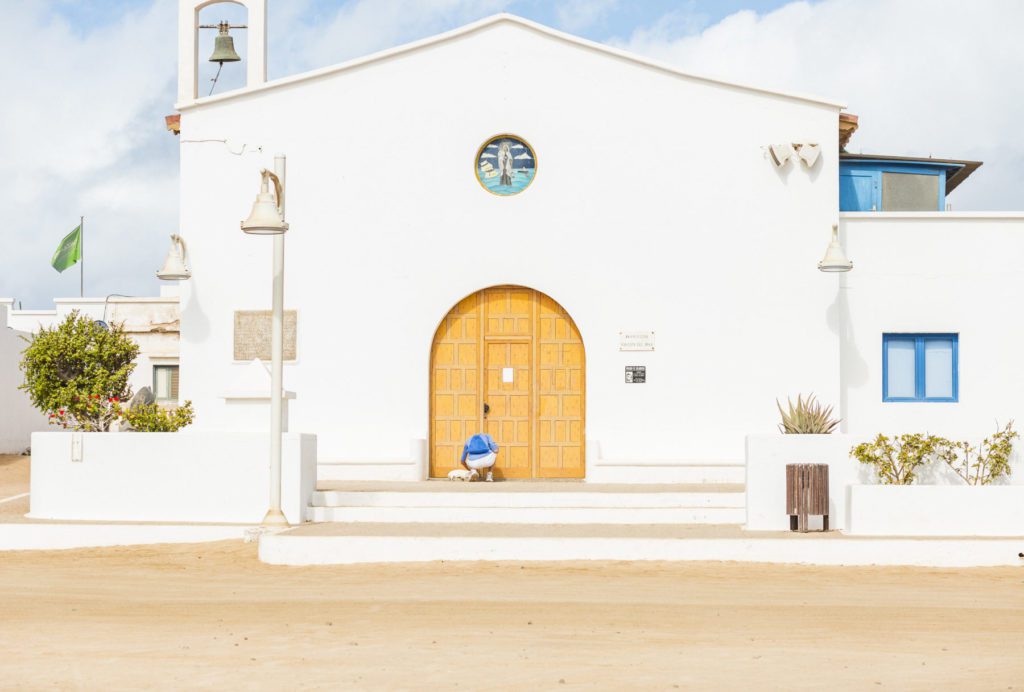 We left La Graciosa by ferry and arrived just in time to contemplate the Janubio salt flats at sunset, a spectacle that connects us with César Manrique‘s description of these salt gardens, with their “linear beauty”, their “blinding colour” and their Mondrian-style structure. 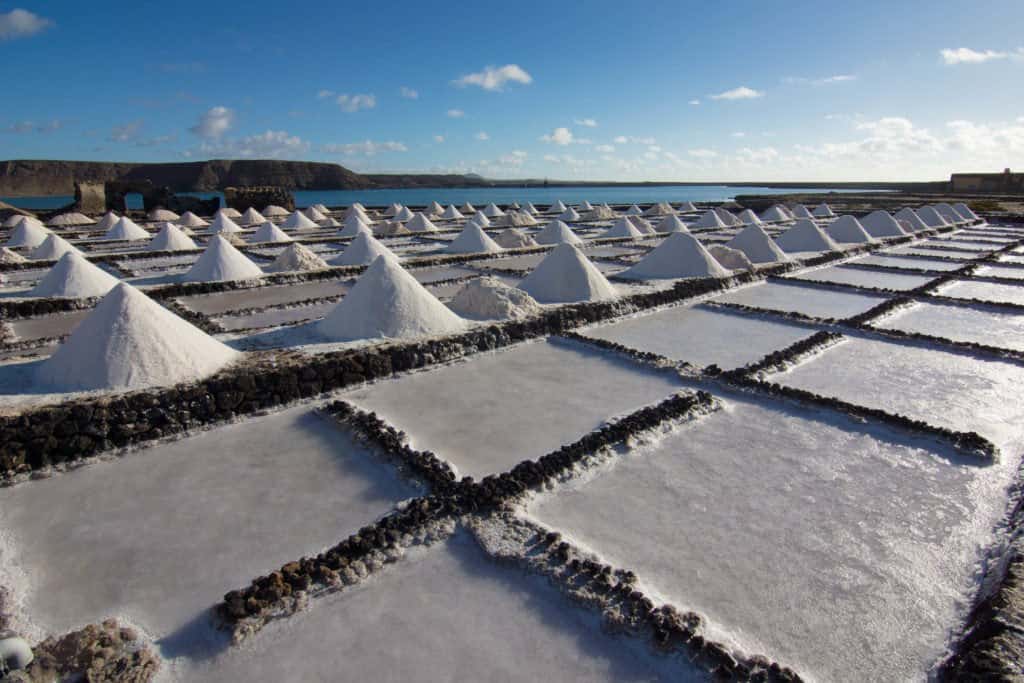 The harvest of sea salt using this traditional engineering technique is a beautiful example of the integration of nature and human life. We put it in our mouths in the form of flakes and feel how it enhances the sweetness of a juicy tomato grown in volcanic sand. These same crystals are coloured with organic pigments at the beginning of June to create carpets on the cobblestones of Arrecife and the Villa de Teguise during the Fiesta de Corpus Christi.

Wherever you look, in Lanzarote everything begins and ends with the sea. 🌊